Fleggsibility - Dissecting the microevolutionary flexibility of a neural circuit 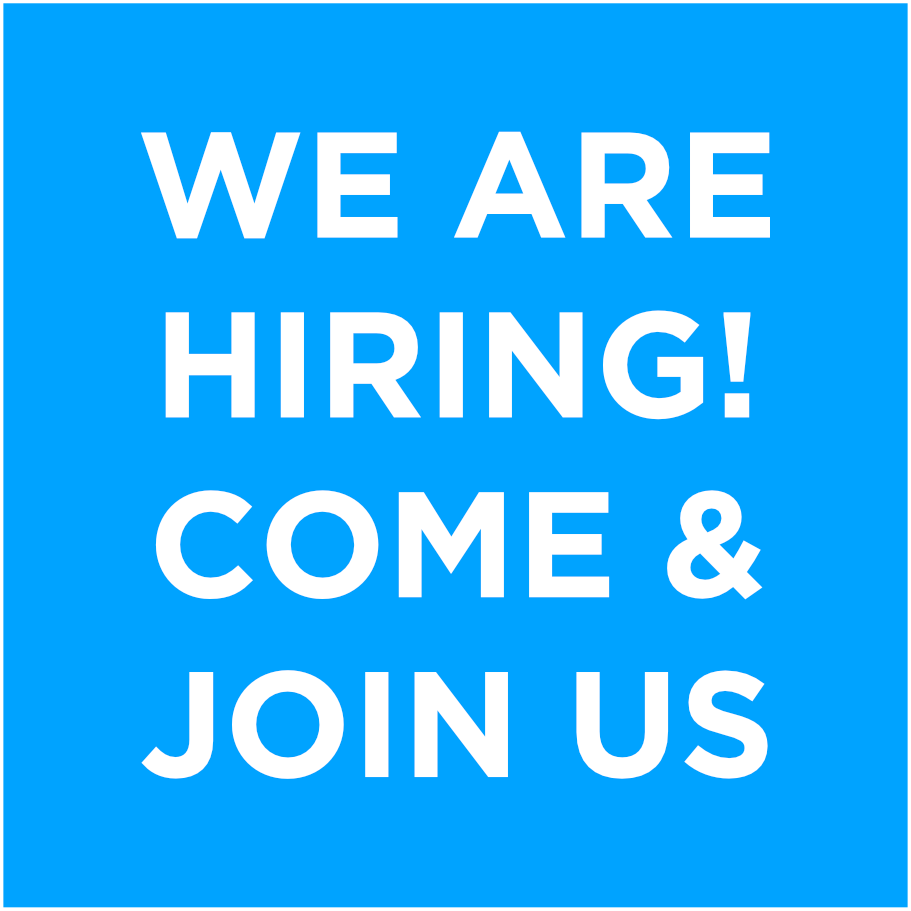 Our project with the team of Christian Braendle (iBV Nice) and ViewPoint: Behavior Analysis Technologies has been selected by ANR ! On the heals of our joint publication (Vigne et al., Science Advances 2021) we will be trying to understand how specific neural circuits evolve to generate natural behavioural variation within species. In particular, the precise genetic changes that modulate cellular and developmental architectures of reproductive systems remain unclear. Here we will focus on the simple egg-laying circuit of the nematode Caenorhabditis elegans as a powerful model system to study natural microevolutionary (intraspecific) variability.

Papers never tell the “story” behind the science. So much had to happen for this to come together! From eagle-eyed curiosity-driven observations, great timing, to outstanding scientific collaboration. I feel lucky for the opportunity to bring such a meaningful work to fruition.

Kudos to all involved in Europe and the US. Past and present lab members who all contributed their essential piece. 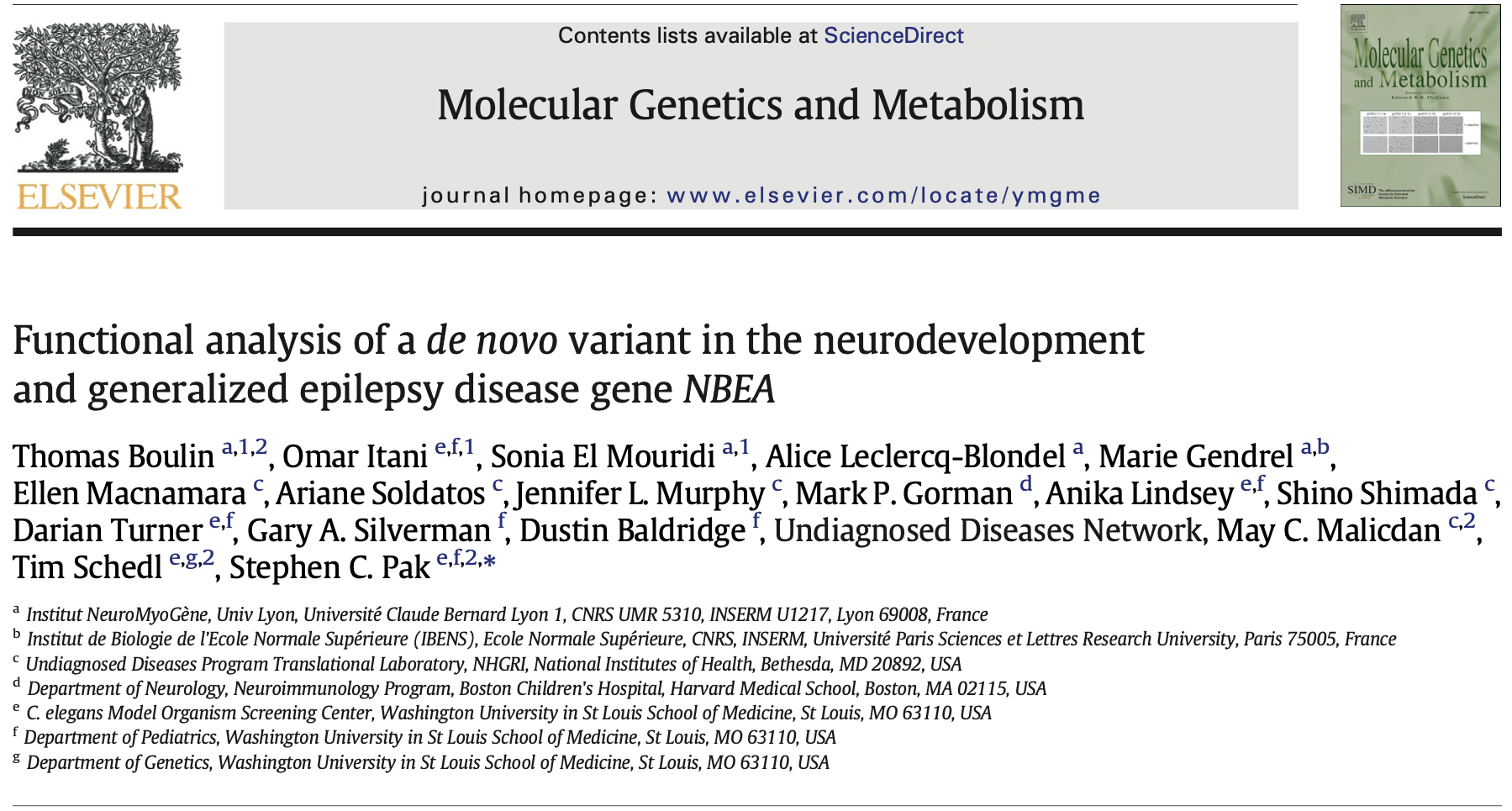 Neurobeachin (NBEA) was initially identified as a candidate gene for autism. Recently, variants in NBEA have been associated with neurodevelopmental delay and childhood epilepsy. Here, we report on a novel NBEA missense variant (c.5899G > A, p.Gly1967Arg) in the Domain of Unknown Function 1088 (DUF1088) identified in a child enrolled in the Undiagnosed Diseases Network (UDN), who presented with neurodevelopmental delay and seizures. Modeling of this variant in the Caenorhabditis elegans NBEA ortholog, sel-2, indicated that the variant was damaging to in vivo function as evidenced by altered cell fate determination and trafficking of potassium channels in neurons. The variant effect was indistinguishable from that of the reference null mutation suggesting that the variant is a strong hypomorph or a complete loss-of-function. Our experimental data provide strong support for the molecular diagnosis and pathogenicity of the NBEA p.Gly1967Arg variant and the importance of the DUF1088 for NBEA function. 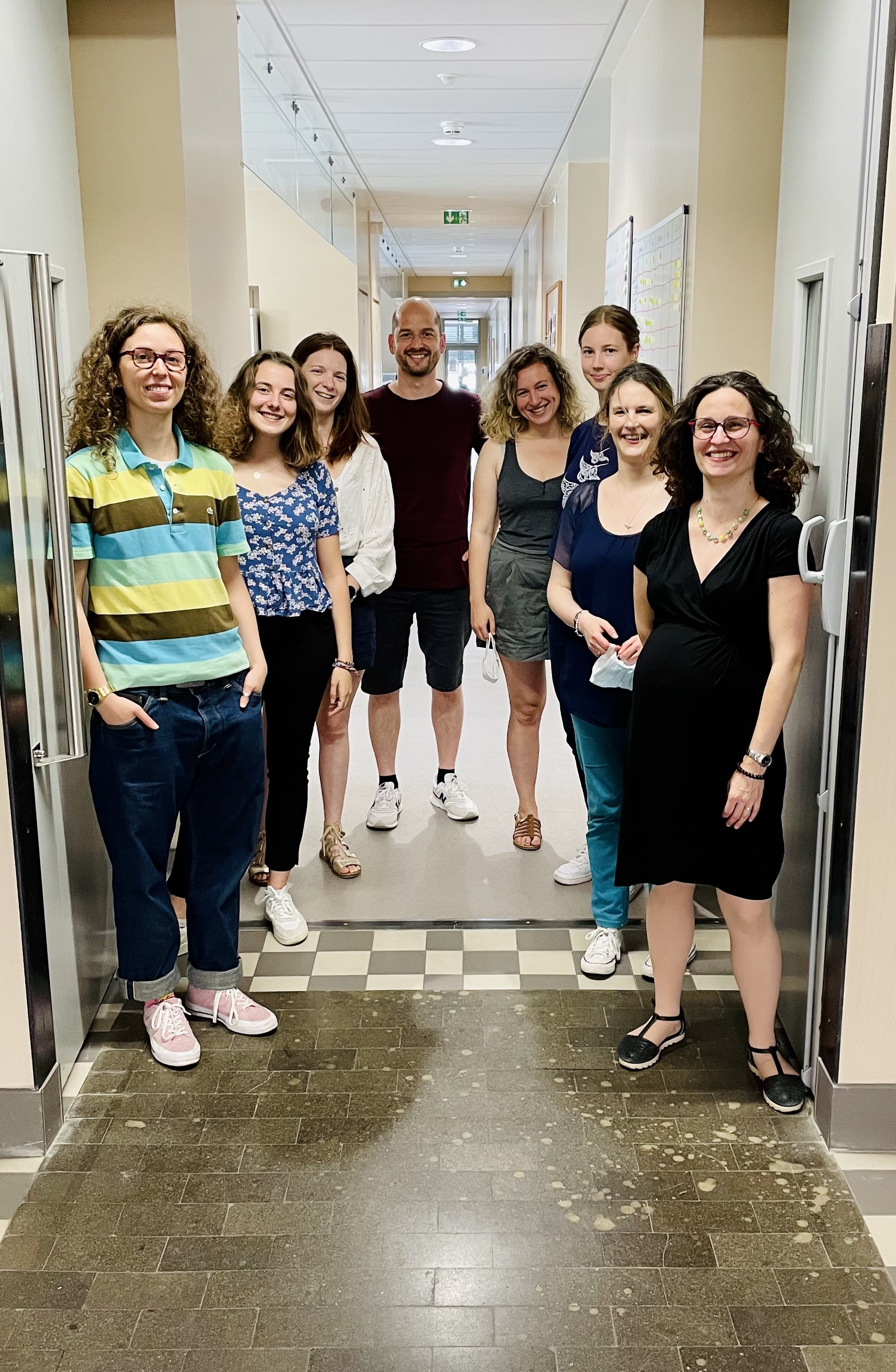 Neurobeachin is a brain-specific protein required for vesicular trafficking, synaptic structure, and synaptic targeting of neurotransmitter receptors. Neurobeachin mutations have very recently been identified as a genetic cause of autism, neurodevelopmental delay and early generalized epilepsy (Mulhern et al., 2018). During a genetic screen in C. elegans, we have discovered that Neurobeachin can also regulate potassium channel trafficking. Interestingly, these channels play a central role in controlling neuronal excitability. In this project, we propose to combine clinical and fundamental research approaches to better understand the pathophysiology of this new neurological disease, identify cellular processes regulated by Neurobeachin, and find new molecular partners that could serve as potential therapeutic targets in the future.

If you are interested in joining the project as a Post-doctoral fellow, Masters, or PhD Student, don't hesitate to contact us!

Great collaboration with Christian Braendle : from wild worms to a single point mutation in an SK potassium channel.

Newest Preprint out on BioRXiv! 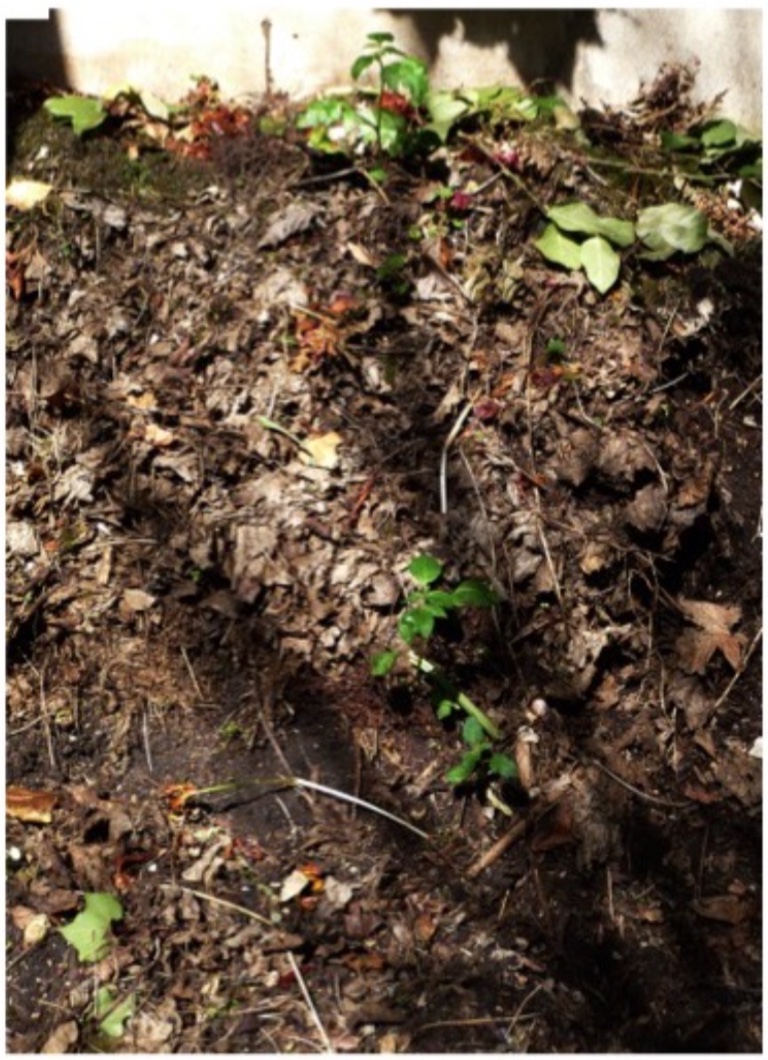 Great collaboration with Christian Braendle : from wild worms to a single point mutation in an SK potassium channel. Great how science pulls us all together!

Genetic assimilation - the evolutionary process by which an ancestral environmentally sensitive phenotype is made constitutive - is a fundamental concept in biology. Its evolutionary relevance is debated, and our understanding of its prevalence, and underlying genetics and molecular mechanisms, is poor. Matricidal hatching is an extreme form of maternal provisioning induced by adverse conditions, which varies among Caenorhabditis elegans populations. We identified wild isolates, sampled from natural populations across multiple years and locations, that express a derived state of near-constitutive matricidal hatching. A single amino acid change in kcnl-1, encoding a small-conductance calcium-activated potassium channel subunit, explains most of this variation. A gain-of-function mutation altering the S6 transmembrane domain causes inappropriate activation of the K+ channel, leading to reduced vulval muscle excitability, and thus reduced expulsion of embryos, irrespective of environment. Using reciprocal allelic replacements, we show that this amino acid change is sufficient to induce constitutive matricidal hatching whilst re-establishing the ancestral protein abolishes matricidal hatching and restores egg-laying, thereby doubling lifetime reproductive fitness under benign conditions. While highly deleterious in the laboratory, experimental evolution showed that KNCL-1(V530L) is maintained under fluctuating resource availability. Selection on a single point mutation can therefore underlie the genetic assimilation of an ancestrally plastic trait with drastic life-history consequences.

Big thanks to our pre-COVID-19 interns Ingrid and Fiona. Lots of energy and exciting results. 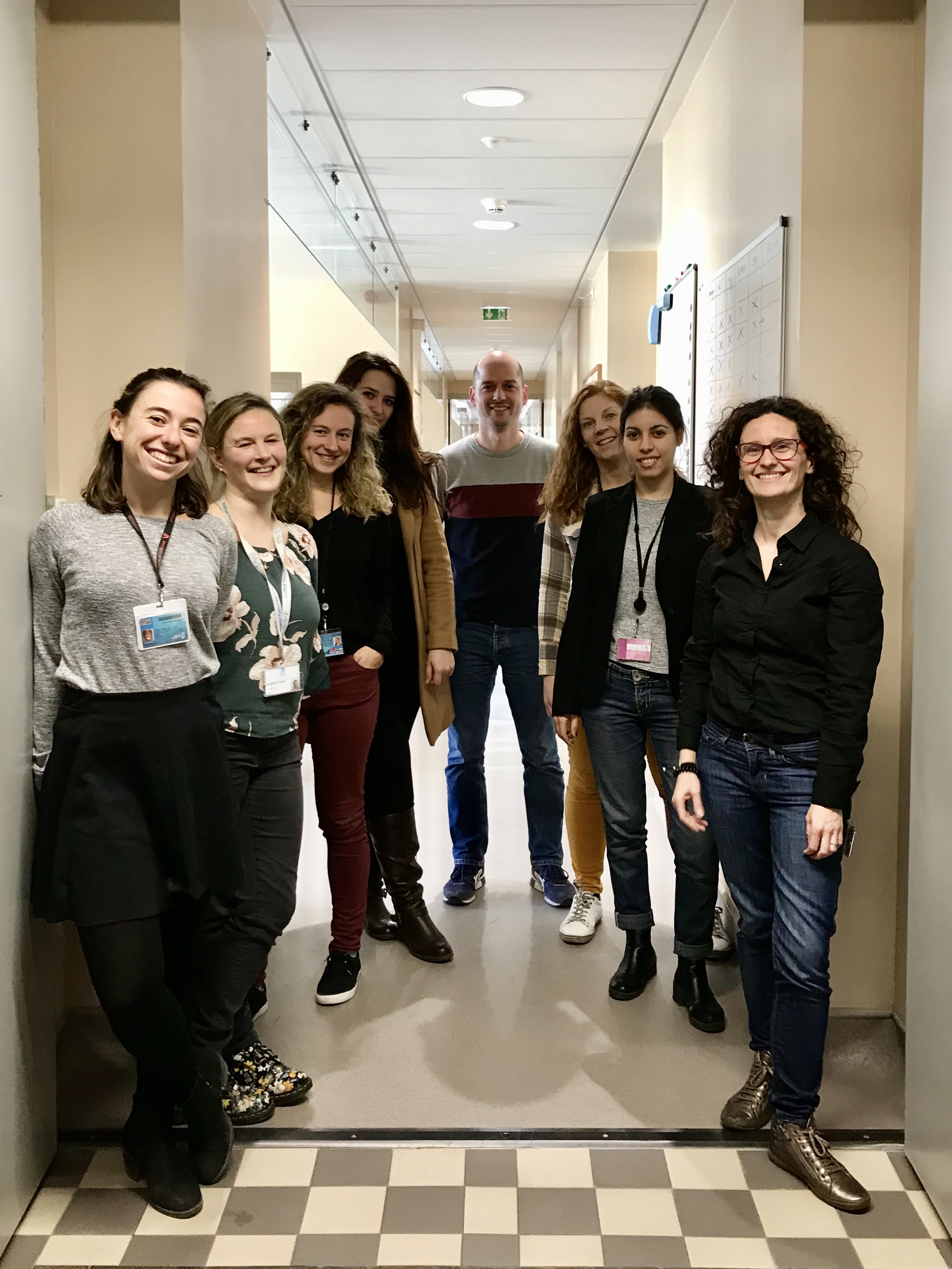 We are grateful to the Fondation Maladies Rares that will support our study of variants of unknown significance of Neurobeachin / NBEA. This funding will allow us to create new tools in the model nematode C. elegans to evaluate the impact of mutations causing this very rare disease associated with strong neurodevelopmental deficits and epilepsy (Mulhern et al., 2018).

We hope that this work will contribute to the diagnosis of patients with novel variants in Neurobeachin in the future in order to better define the phenotypic spectrum of this "disease" (NEDEGE).

A big thank you to Léa, Charlotte, Emilie (not pictured), and Quentin who have been wonderful rotation students this year. They have each pioneered new projects in which we model genetic variant for human diseases in C. elegans. 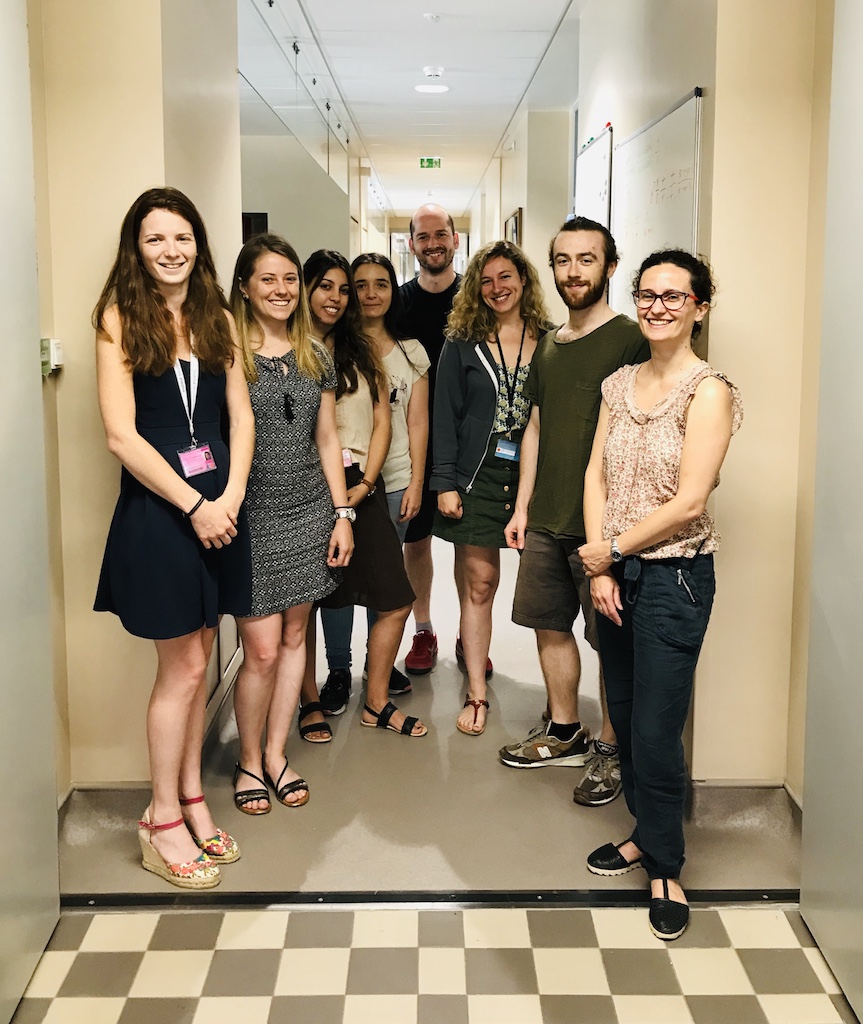 Today on #RareDiseaseDay we submit our 1st application to the NIH's Undiagnosed Diseases Network "Gene Function Studies" call. It flows directly from ERC-funded blue-sky research. We hope that it will get funded so we can demonstrate (once more...) how basic non-applied "worm research" leads directly to Rare Disease model systems!

Despite very encouraging and positive comments, our proposal was not funded by UDN. We'll keep working on it and try again next year. 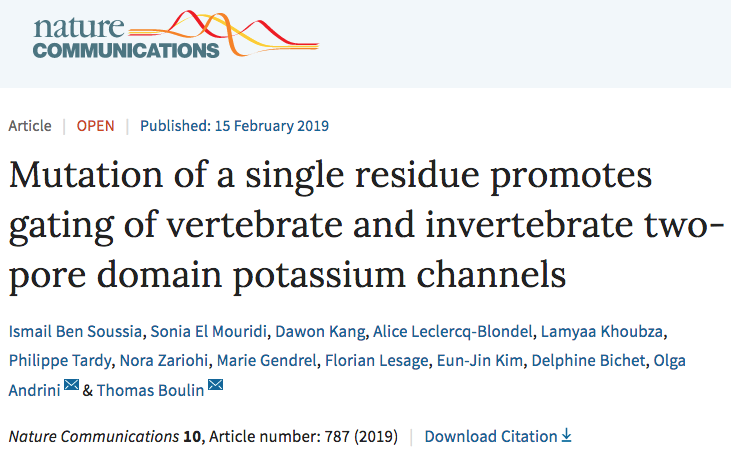 Editor's Summary: "Mutations that modulate the activity of ion channels are essential tools to understand the biophysical determinants that control their gating. Here authors reveal the role played by a single residue in the second transmembrane domain of vertebrate and invertebrate two-pore domain potassium channels."

Indeed, we found that “Mutation of a single residue promotes gating of vertebrate and invertebrate two-pore domain potassium channels”. We named this position TM2.6. 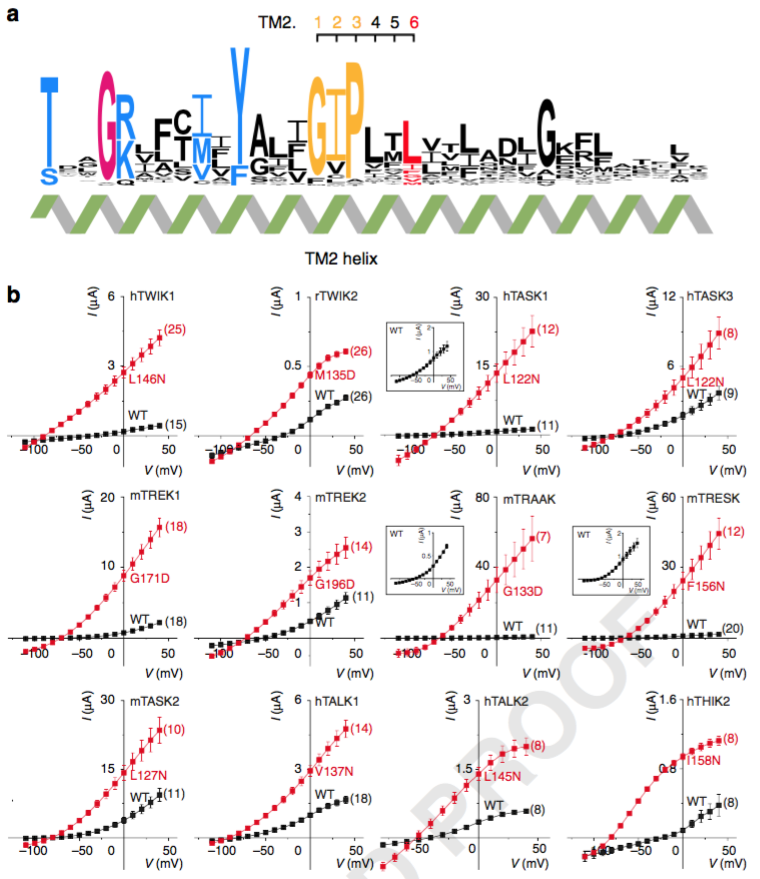 We think this works by increasing K2P channel open probability (first found serendipitously for ORK1 by Ben-Abu, Zhou, Zilberberg and Yifrach in 2009, and by Chatelain et al. and @ProfKalium (S. Tucker) for TWIK1 and THIK channels) 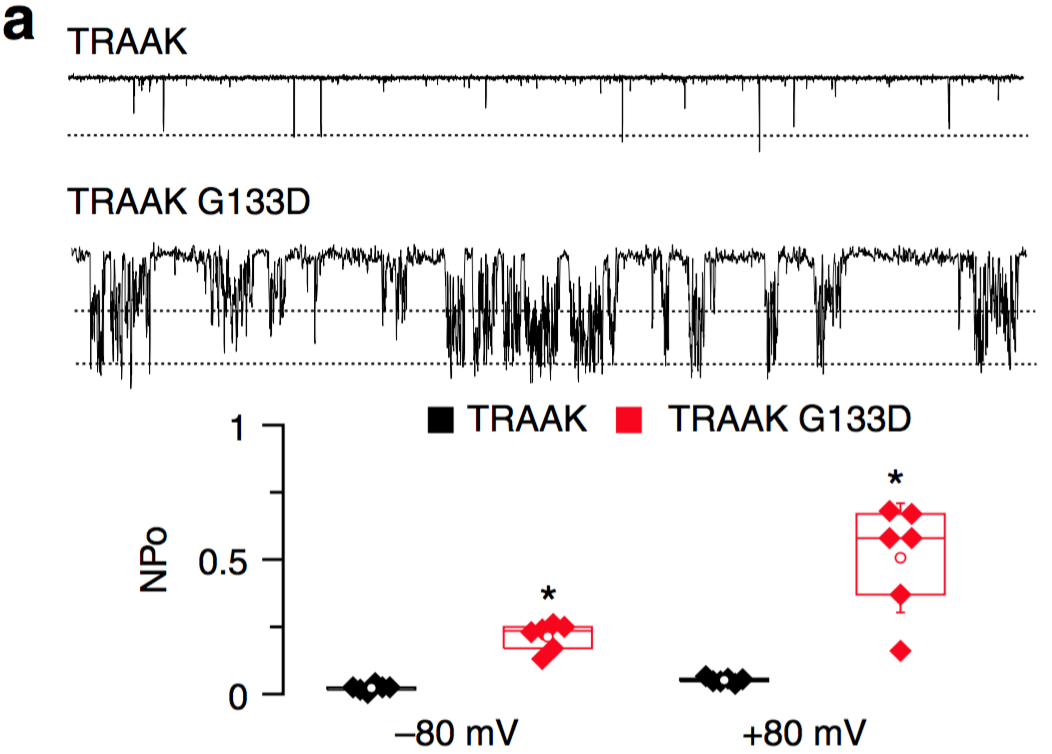 It got better, when we saw that we could tune the effect of these gain-of-function mutants by using different amino acid substitutions. 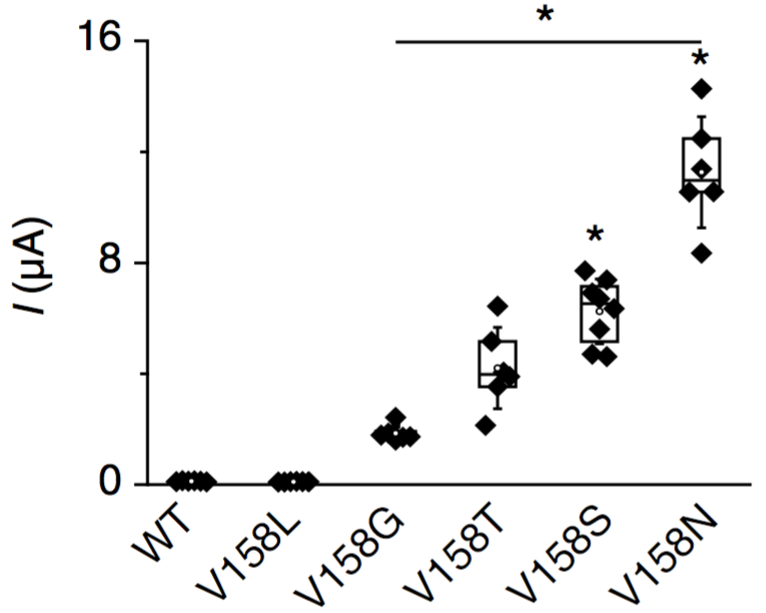 Using CRISPR/Cas9 gene editing, we then created designer gain-of-function mutants in 4 C. elegans K2P channels (and many more since…), which phenocopy those found by Sydney Brenner and Bob Horvitz. This works consistely despite very divergent primary amino acid sequences.
Altoghether, this has been a crucial finding for us because, we were looking for a way to increase the activity of K2P channels in worms to find the genes that are required for their function in vivo.
(On a personnal note, this has solved the entire AIM 3 of our @ERC_Research project *Kelegans*, and then some! Incredibly satisfying when science works out in this way)
And it has opened the way to a (frustratingly) large universe of new projects. Using genetic screens, we have now drawn lines between K2P channels and major cellular players such as Ankyrin, Notch, and most recently, the Dystrophin complex! More about that in the coming year.
Let us know if you have comments, questions, are interested in reagents or collaborations, or just want to chat about our work.

All moving boxes are gone. Science going on. 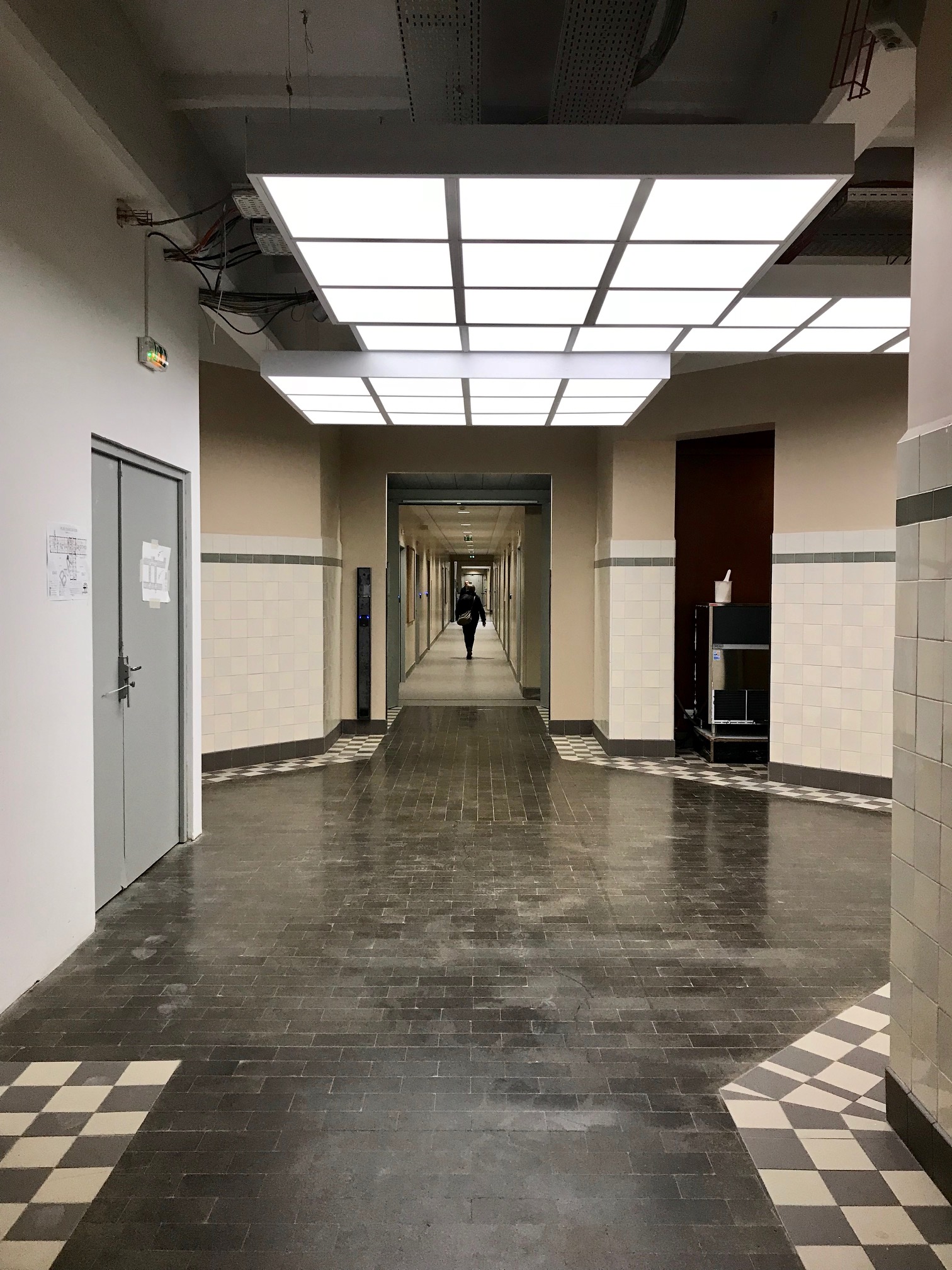 After a rocky move across town featuring: snow, ice, rain, city-wide power outage, failing elevators, missing keys, we are (almost) all setup and operational in our brand spanking new lab space.
14 teams and 200 people finally under/on one roof/floor! Now, let's do some science. 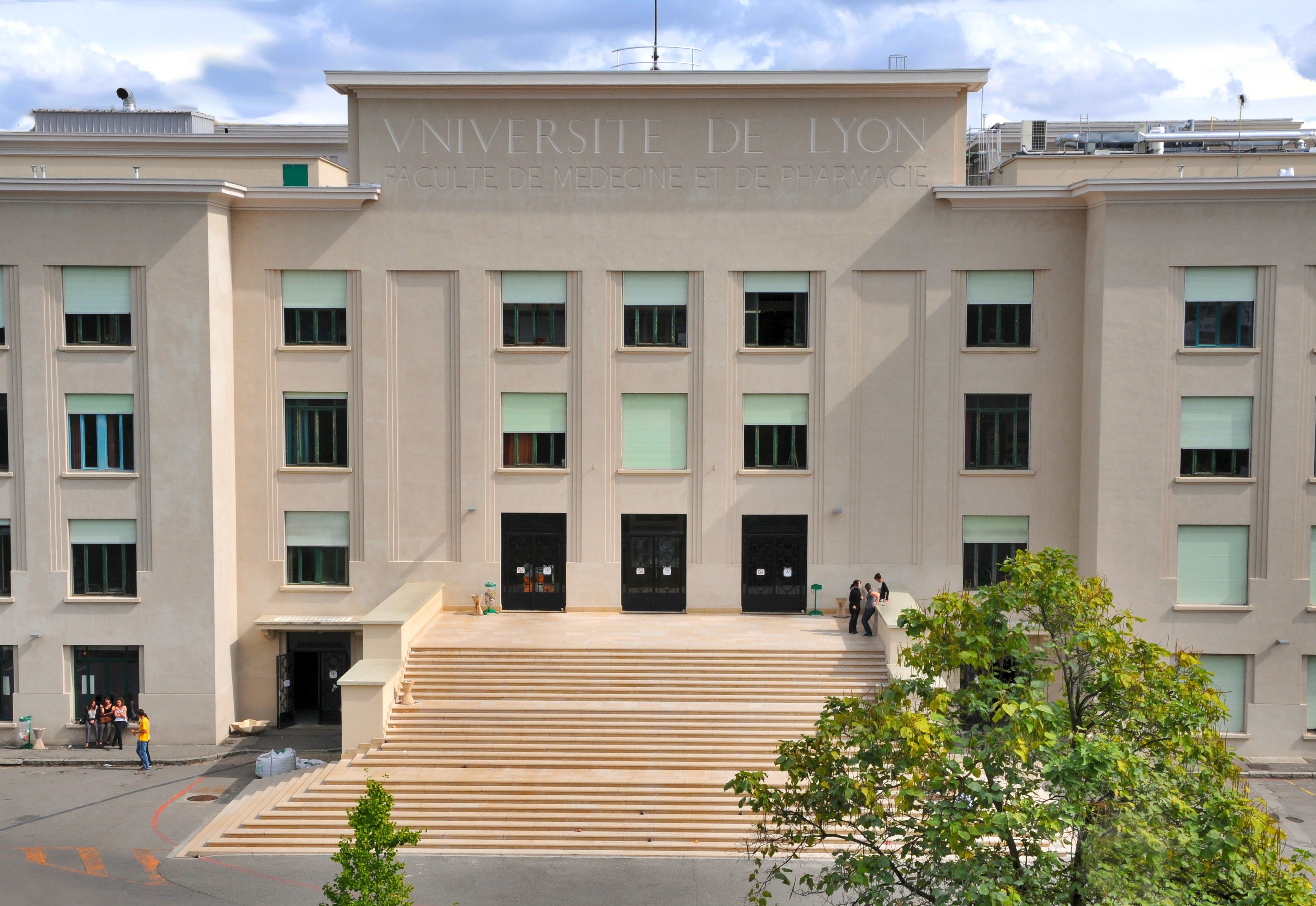 What a shock when you turn on the microscope and see such a striking subcellular localisation at the tip of every muscle cell. Figuring out how this is possible is going to be an amazing journey. 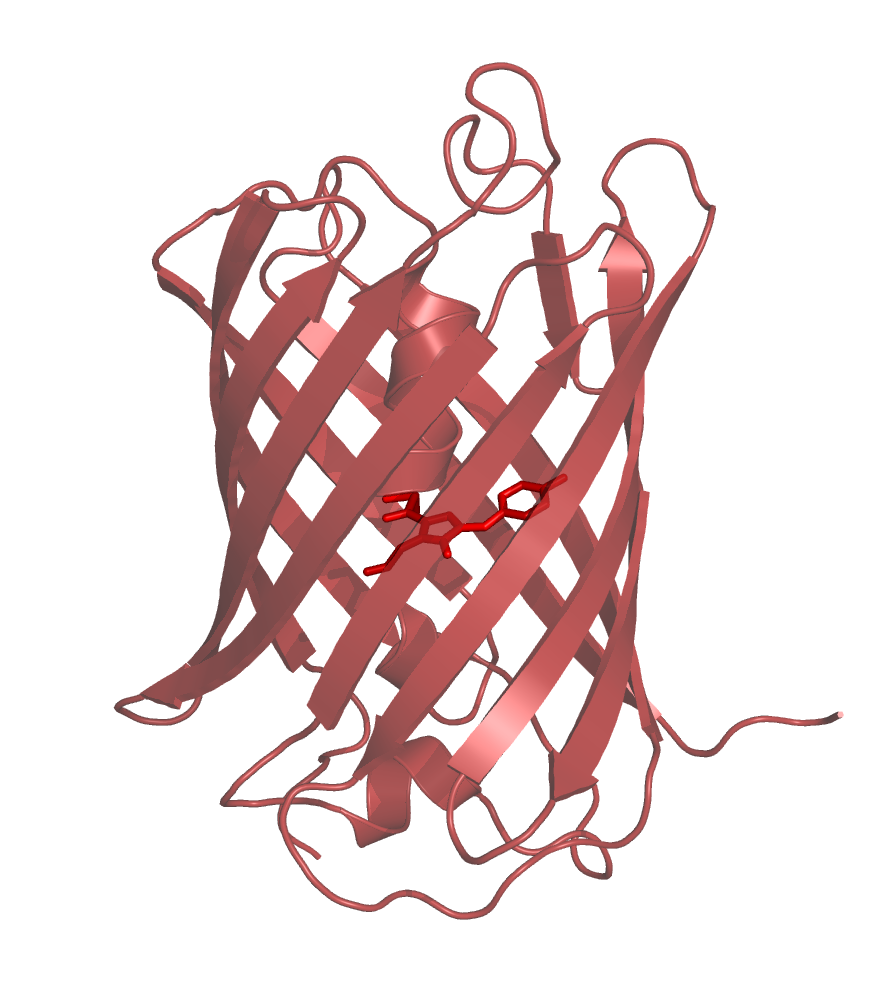 146 Labs and counting!  wrmScarlet is freely available for all labs who want it. Visit the following page for the page dedicated to this paper.

To efficiently and freely distribute the wrmScarlet sequence to the community, we have decided to list here all the labs that we have sent the sequence to. Please contact us or anyone on the list to get your copy of the plasmid.
More information here

Posters, check! Talk, check! 30 wrmScarlet vectors gone in 3 min, check! 70+ requests to be sent out in the coming days, pending...

And to top it off, Sonia wins the Dr. Matthew J. Buechner Tie Award for service to the community! 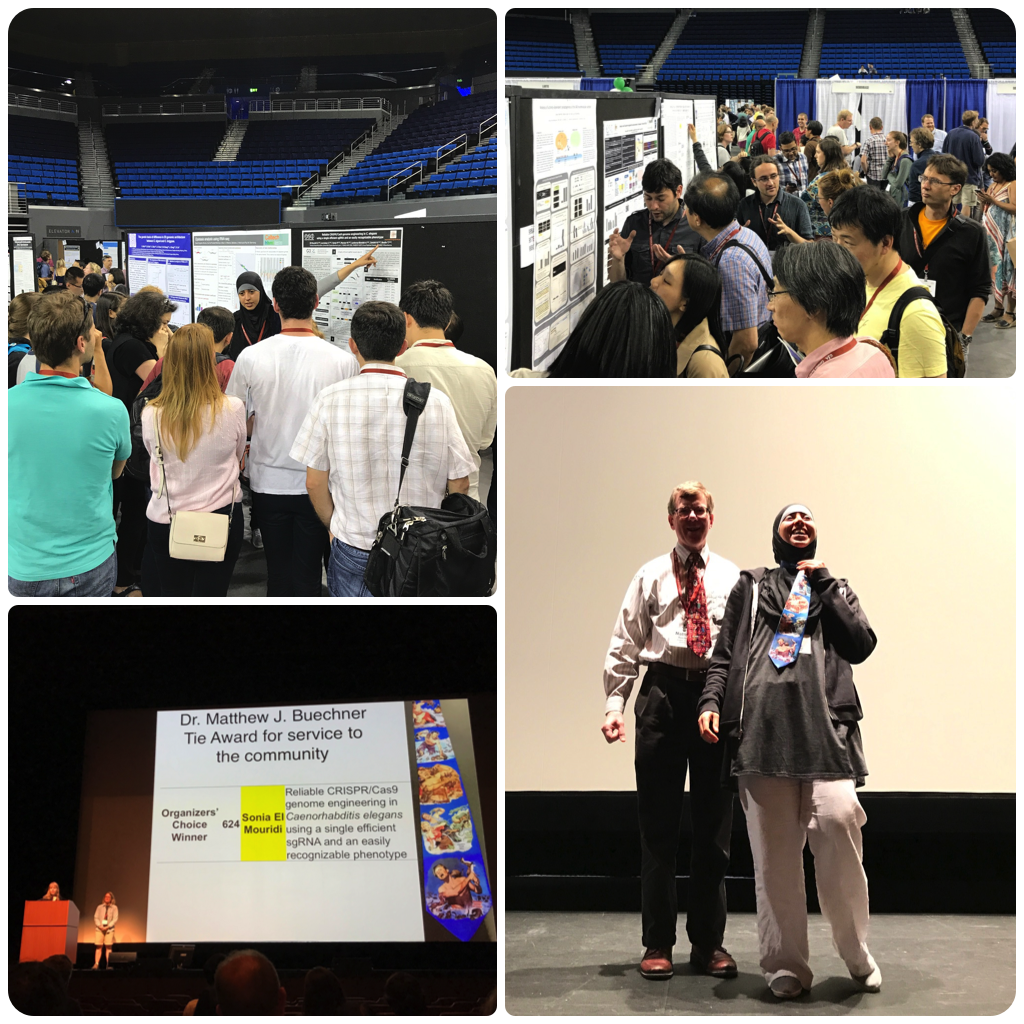 Our paper has just been accepted at G3: GENES, GENOMES, GENETICS!
27 days from submission to acceptance!

Congratulations to the whole team! It was a great collective effort.